When are Chinese tourists most likely to travel abroad, and how should destinations prepare for these peak times? We've prepared a guide, including China's 2020 national holiday schedule.

To best attract and prepare for Chinese outbound tourism, it’s essential to understand when Chinese are most likely to travel. So we’ve prepared a helpful guide to China’s national holiday schedule to help identify peak times and destinations. 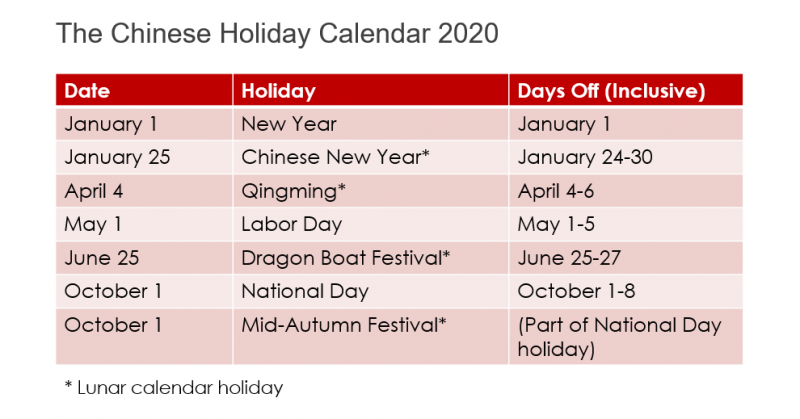 Click here for more details on the 2020 calendar, including weekend working days.

China’s biggest and most important holiday is Chinese New Year, also known as Spring Festival or Lunar New Year. As it is based on the traditional Chinese lunar calendar, the date changes every year, but it always falls between late January to mid-February. The national holiday period is 7 days, one of two long ‘Golden Week’ holidays for Chinese workers. As Chinese New Year is traditionally a time to reunite with family, this is an especially important week for family travel.

In 2019, 6.31 million Chinese traveled abroad over Chinese New Year, according to the National Immigration Administration, a 12.5% increase. According to ForwardKeys, FIT increased by 18.8% for the same period. Asian destinations are most popular at this time of year, though with a week’s public holiday and four weeks off for schoolchildren, there is time for long-haul travel, too.

Booking for Chinese New Year travel starts early, and destinations around the globe cater to Chinese communities and visitors during this time, with traditional cultural celebrations as well as commercial activities such as special window displays and promotions.

Another major holiday for overseas travel, especially for long-haul trips, is China’s National Day, the second ‘Golden Week’, which starts on October 1 each year. The Mid-Autumn Festival, another one of the most important traditional Chinese holidays, is based on the lunar calendar and is celebrated with one day off. Always around the end of September or beginning of October, Mid-Autumn Festival can sometimes overlap with the National Day holiday, merging into an eight-day holiday. In 2019, however, the two were several weeks apart, with a long weekend in mid-September, followed by a week-long holiday at the start of October. In 2020, Mid-Autumn Festival is on October 1, and the total holiday period will be extended to eight days.

In 2019, around 7 million Chinese traveled overseas. The top destinations, according to Ctrip, were: Japan, Thailand, Singapore, USA, Australia, Malaysia, Philippines, Vietnam, UK, and Italy. Although Asia is still popular in October, this is also the peak season for longer-haul and less traditional destinations such as Africa and Latin America.

International Labor Day, celebrated on May 1st, was once a third Chinese ‘Golden Week’, but it was downgraded to one day off in 2008, when Dragon Boat Festival, Mid-Autumn Festival and Qingming all became additional public holidays. In 2019, the May holiday was extended to a holiday of four consecutive days off, as May 1 fell on a Wednesday. But in 2020, although May 1 is on Friday, the holiday period has been extended even further, to five days in a row, greatly increasing opportunities for travel. Just the one extra day in 2019 led to a surge in travel bookings, with Fliggy reporting a 150% increase in outbound flight bookings after the holiday extension was announced. Lvmama saw an 8% total increase in outbound trip bookings in May 2019 compared to 2018, and Hotelbeds’ list of most popular destination cities for the May holiday saw a three-fold increase in destinations outside of Asia.

Another lunar holiday, held between late May and late June, Dragon Boat Festival is only a one-day holiday for Chinese workers. But, perhaps because of favorable weather conditions at this time of year, it is becoming an increasingly popular time for outbound travel, even to long-haul destinations. There were 2.71 million outbound trips in 2017, up 7.2% year-on-year. According to the CNTA, the most popular destinations in 2017 were Russia, Thailand, Italy, Vietnam and France. This holiday was chosen by only 5% of travelers in the 2017 Hurun Report, and not included in the 2018 report at all.

There is no national holiday in the summer, but it is one of the most popular periods for Chinese outbound tourism, with a particular emphasis on family tourism, and graduation tourism and educational tourism for young Chinese. According to data from ForwardKeys and COTRI, Chinese outbound travel bookings for summer 2018 were up 13.5% compared to the year before.

It was also the third most popular travel period in both the 2017 and 2018 Hurun Reports, with 17% and 19% of HNWI Chinese planning to travel in the summer, respectively. 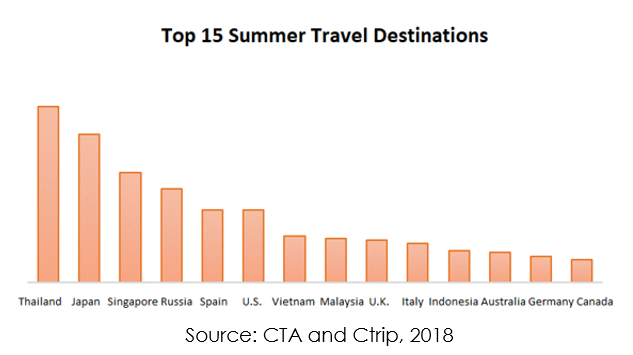 In 2018, southern hemisphere destinations Australia and New Zealand, as well as Nordic countries, were particularly popular for Chinese travelers trying to escape the summer heat. New Zealand encouraged summer travel particularly well in their 2018 WeChat marketing, with a number of posts about both family travel and winter activities.

Held on April 4 or 5, Qing Ming is also known as the Tomb Sweeping Festival, a time to return to one’s hometown to pay respects to ancestors. Because of this, and because it is another one-day holiday (celebrated, like the others, with a three-day weekend), Qingming is primarily a time for domestic travel. According to the Chinese Ministry of Culture and Tourism, there were 100 million domestic trips during the 2018 Qingming holiday in China.

The Western New Year is also celebrated in China, with a national holiday on January 1st. While this day off alone doesn’t have a major impact on travel, Christmastime travel is increasingly popular for Chinese tourists. In 2019, ForwardKeys reported a 19.5% growth in Chinese flight bookings to Europe around the Christmas period.

Travel modes and behaviors change accordingly to the holiday period when Chinese travel overseas. Below are a few considerations and tips for your travel brand:

This largely depends on the climate. Warmer and island destinations are popular during the cold months of Chinese New Year, although there is interest in colder destinations for winter tourism – including skiing tourism and Christmas tourism – as well, while cold climate Russia is popular during the summer months. Knowing when Chinese tourists visit your destination can be of great help, as well as knowing what different activities they engage in during different times of the year.

Long-haul travels are concentrated around the seven-day holidays of Chinese New Year and National Day, as well as the summer months, when students have two months off school. Southeast Asian trips are popular destinations for long weekends. The length of the trip will also have an impact on the number of activities and locations visited, with more opportunities to promote and develop regional or more off the beaten track destinations.

Chinese New Year is about family unity, so this time of year sees many extended families traveling together, having different implications for the services needed. During the summer months. Parents take their children traveling, while retirees mainly travel during the off-season when traveling is cheaper. It is harder to predict when wealthy Chinese travelers will go overseas, as 48% of respondents in the Hurun Report’s 2018 survey said they did not have a fixed time to travel.

In the past, Chinese tourists tended to book their outbound travel very early, but this is decreasing significantly as Chinese travelers become more experienced and many countries have relaxed visa restrictions, either offering visas on arrival or waiving visas altogether. Because of this, booking times are getting shorter and shorter, with a 2018 survey revealing that over 40% of outbound travelers surveyed booked their flight tickets only two weeks before the trip. However, bookings to expensive and remote destinations – especially those that still require a visa – will still be longer than this, and the inspiration and planning phase of a trip can start well before tickets and accommodation are actually booked, meaning that destinations outside of Asia should still think about their marketing several months before a major holiday period.

The correct timing of your promotional activities can truly impact their success. Travel brands are advised to start running holiday-period promotions around one to two months in advance.

Festivities present a great opportunity to send holiday greetings and engage with your fans and followers. Running a red packet campaign for Chinese New Year is a good way to show Chinese consumers that you care, and to stand out in their minds.

This article was first published in December 2018 and was last updated in November 2019.