Which WeChat articles by regional and municipal tourism boards got the most views in 2019? Here are the top 10 most-viewed posts published on WeChat this year.

Which WeChat articles by regional and municipal tourism boards got the most views in 2019? Here are the top 10 most-viewed posts published on WeChat this year. The ranking is based on the number of views the article received the week it was published (as catalogued in Dragon Trail’s WeChat rankings), but we’ve also checked how many views each article has racked up since then.

Half of the most-read posts in 2019 were published by the Hong Kong Tourism Board. As the world’s most popular destination for trips outside of mainland China, Hong Kong ranked as the no. 1 DMO in both Q1 and Q2 of this year, but dropped to no. 4 in Q3 after the account stopped posting altogether from the beginning of August, with the exception of once in November and once in late December. Hong Kong’s success on WeChat for the year belies a grim situation for its tourism industry, with ongoing protests keeping away mainland Chinese – and other nationalities’ – tourists. In the early summer, however, the Hong Kong Tourism Board was experimenting with some very interesting horizontal WeChat content layouts – see below for examples.

Other leading posts from 2019 come from Edinburgh, New South Wales (Sydney), the Marianas Islands, Zurich, and Dubai. Read on for the full list, and click here to view 2019’s top WeChat articles by national tourism organizations. 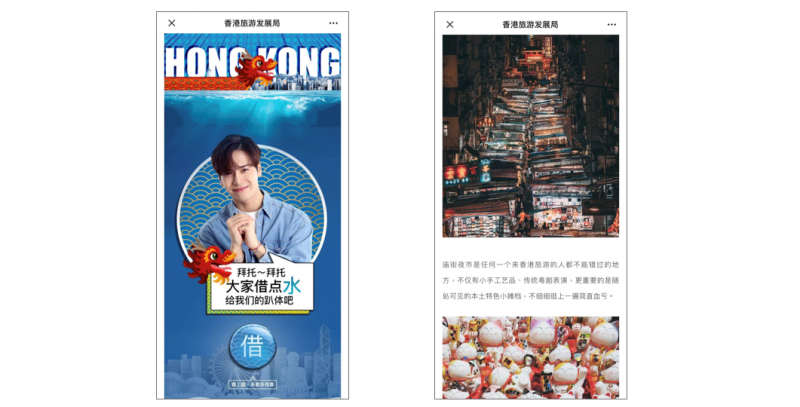 The Hong Kong Tourism Board published half of the most-viewed DMO articles on WeChat in 2019, including these posts on the Dragon Boat Carnival (left, ranked no. 3) and slow travel (right, ranked no. 10)

The Hong Kong Tourism Board experimented with horizontally oriented WeChat posts this summer, which proved popular and are engaging for readers

This interactive, animated, horizontal post from the Hong Kong Tourism Board was extremely fun and engaging, and drew in readers with celebrity tourism ambassador Jackson Wang

Edinburgh’s standout post engaged current and past Chinese students in the Scottish capital, with UGC photo content, and memories shared by those who had already graduated While the article design wasn’t very exciting, news about visa-free travel to the Marianas Islands was a hit Posts about national days tend to do well on WeChat, and Zurich’s was no exception Dubai lit up the Burj Khalifa with Tuzki – a rabbit character from WeChat stickers – and the Chinese flag, to celebrate the 70th anniversary of the People’s Republic of China

The WeChat guide to Hong Kong Arts Month this year was even more popular than in 2018, when it got around 45,600 views

*Please note that the highest number of views counted by WeChat is 100,000.