What kind of WeChat content stood out for international museums in 2021? Take a look through the top 10 most-viewed posts of the year to find out which cultural institutions' Chinese social media marketing captured the most attention. 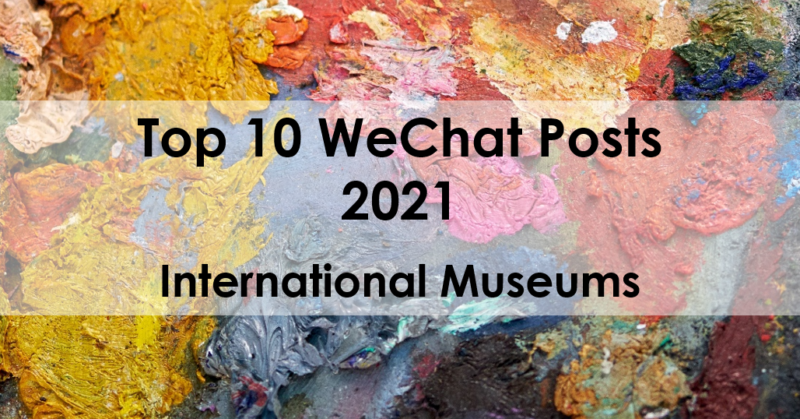 What kind of WeChat content stood out the most for international museums in 2021? Based on Dragon Trail’s weekly WeChat Rankings data, we’ve put together a top-10 list for museum articles this year – they’re ranked by the number of views they received by the end of the week they were posted, but we’ve also included the total number of views as of 17 December.

As in 2020, the Louvre, the Museum of Modern Art, and the British Museum topped the rankings for the most-read WeChat posts by overseas museums. And similar to last year, The British Museum’s top posts included a gift guide and an exhibition calendar, while the Louvre made several announcements about its Chinese-language channels and celebrated the museum’s anniversary. MoMA’s romantic posts for 5/20 and Qi Xi were popular, but its most-viewed article focused on contemporary Chinese architecture.

10. Louvre Museum.
We’ve launched a new WeChat account
3,640 views for the week of 25 September-1 October. 4,065 views as of 17 December.
From 1 October, the Louvre transferred over from a subscription-style WeChat Official Account to a service WeChat account. What’s the difference?

9. The Museum of Modern Art
MoMA’s big mid-year exhibition, “Cézanne Drawing,” is here!
3,664 views for the week of 19-25 June. 5,982 views as of 17 December.
MoMA’s Cézanne exhibition looks at the artist’s drawings and how they influenced and provided the basis for his more famous painted works. This article introduced the topic, with a short video and some of the pieces from the exhibition.

8. The Museum of Modern Art
Love at MoMA
3,713 views for the week of 15-21 May. 5,179 views as of 17 December.
This post explored all the way MoMA visitors love each other, including pictures of couples of all ages at the museum, and even several marriage proposals. Not just limited to romantic love, however, there were also photos of parents with their children, and friends enjoying the artworks together. The article was published on 5/20, or “I Love You Day.”

MoMA: (left to right) posts about love for 5/20 and Qi Xi, and an article on the “Cézanne Drawing” exhibition

5. The British Museum.
Gifts for Chinese New Year and Valentine’s Day
4,385 views for the week of 13-19 February. 6,110 views as of 17 December.
With both Chinese New Year and Valentine’s Day on the way, the British Museum featured Year of the Cow bracelets and jewelry inspired by the Rosetta Stone, all available in China through the museum’s flagship store on Tmall.

4. The British Museum
2021 exhibition guide
4,425 views for the week of 6-12 February. 5,419 views as of 17 December.
This article announced the museum’s six major exhibitions of the year, including “Arctic: Culture and Climate,” “Nero: The Man Behind the Myth,” and “Peru: A Journey in Time.” 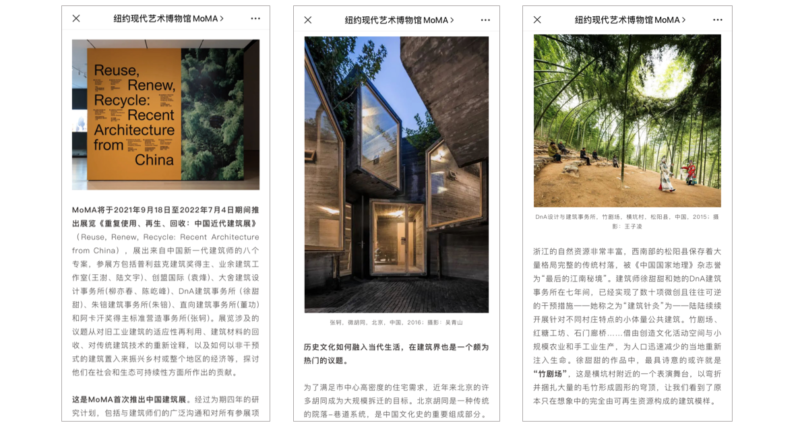 3. The Museum of Modern Art
MoMA’s first Chinese architecture exhibition
5,297 views for the week of 25 September-1 October. 7,002 views as of 17 December.
In September, MoMA opened an exhibition called “Reuse, Renew, Recycle: Recent Architecture from China.” The article introduced the exhibition, which looks at how Chinese architects have been building in an environmentally and culturally sustainable way, through renovations, using recycled materials, and reinterpreting traditional construction techniques. 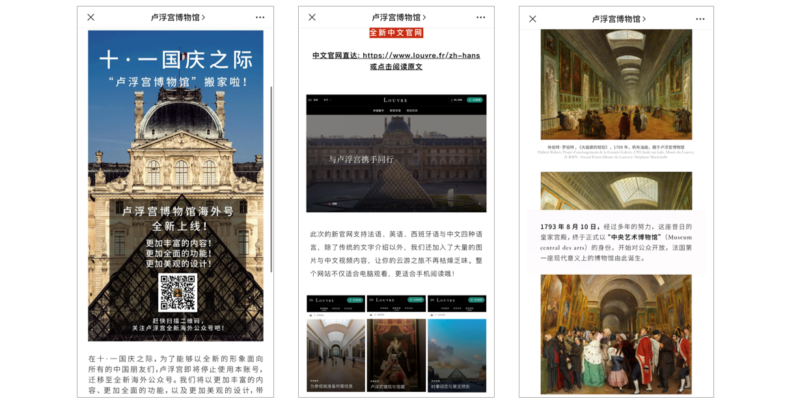 In 2021, the Louvre (left to right) launched a new WeChat account and a new Chinese website, and celebrated its 228th anniversary

2. Louvre Museum
The Louvre is celebrating its 228th birthday
6,757 views for the week of 7-13 August. 7,422 views as of 17 December.
The Louvre celebrated its 228th birthday with a WeChat article about the museum’s history, including a short video tour of museum highlights.

1. Louvre Museum
All-new Chinese website launched
8,561 views for the week of 10-16 April. 11.7k views as of 17 December.
The Louvre launched a new Chinese website this summer, while also offering a catalogue of close to half a million pieces from its collection through the English-language website.