A video series, KOL trip, social media and website are all part of Peru's multi-channel and multi-media B2C strategy to educate and inspire Chinese tourists 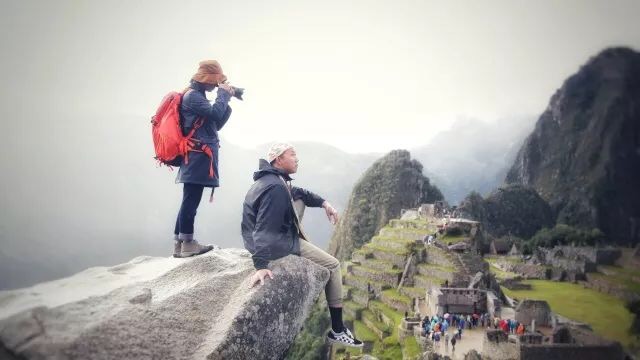 From 2017, PromPeru – Peru’s national tourism board – kicked off an extensive campaign to raise awareness of the South American country in China. As a niche, up-and-coming destination for Chinese tourists, much of the focus has been on a B2B education initiative aimed at both Chinese travel agents and Peruvian travel suppliers, the details and results of which we have covered in a previous article. In this second part to our series on PromPeru’s China marketing strategy, we will look at the tourism board’s multi-channel and multi-media B2C strategy.

Peru takes around 30 hours to reach from China’s major cities, until the last few years it had a quite restrictive visa policy, and knowledge about the country is relatively low. On one hand, this creates a sizeable challenge to start spreading awareness, but on the other hand, it represents an excellent opportunity for PromPeru to dictate and cultivate the image they want to project, and target upscale travelers and FITs in search of new destinations and experiences.

In October 2017, Peru launched its official Chinese tourism website, Perutravel.cn. To best serve the Chinese market, the website is not only all in Chinese, but it is hosted in China, and optimized for mobile. Find out more about why these features are so important in our ‘Top 10 Tips for Chinese Websites’ article. 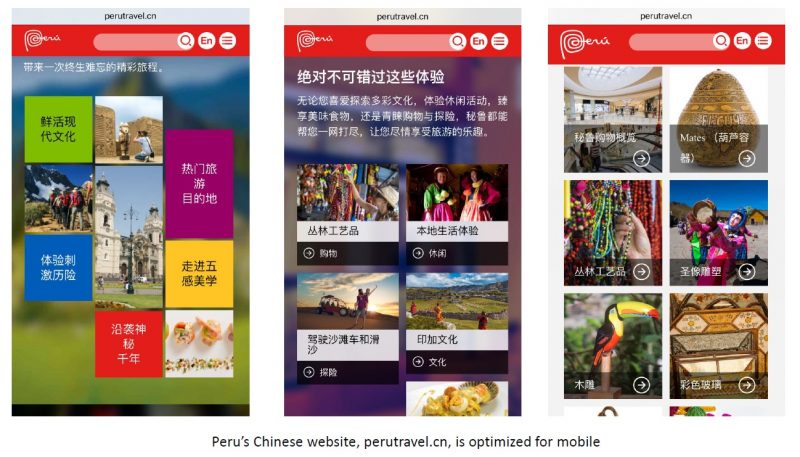 This bright, colorful site introduces Peruvian travel destinations, activities, culture, gastronomy, shopping and more, alongside practical information on visas, transportation, climate, and health & safety. So far, the section on the Amazon jungle is the most popular page on the website, and upcoming articles include a destination profile for Colca Valley, articles on bungee jumping, hang gliding, and paragliding, and an introduction to the drinks of Peru.

PromPeru launched an official account on China’s leading social media platform, WeChat, in June 2017. The articles published by the account each week include destination guides, activity suggestions, practical advice, contests and lots of coverage of Peruvian food, all with stunning and enticing photos. The most popular posts so far have been an article on Machu Picchu, another entitled ‘Where Do Peru’s Delicious Tastes Come From?’, and a third on Lima at night. ‘Where Do Peru’s Delicious Tastes Come From?’ is one of the most popular articles from PromPeru’s WeChat account

The social media channel’s content and themes were agreed on together by PromPeru and Dragon Trail, and aimed at highlighting six travel destination as chosen by PromPeru: Lima, Ica, Cusco, Arequipa, Puno and the Amazon. The information and materials are provided in part by PromPeru, and also researched independently by Dragon Trail’s social media team.

Peru’s account on Chinese microblogging platform Weibo was set up in April 2018, in order to complement a two-week KOL trip to Peru. Reposts of video and photo content from the KOLs’ accounts have already received up to 100,000 views, with images of the starry sky and videos of the KOLs traveling through Peru particularly popular. In contrast to PromPeru’s detailed and informative WeChat articles, which often take over a month to plan and execute, the Weibo content is created more rapidly, to reflect and pick up on hot topics and seasonal themes. 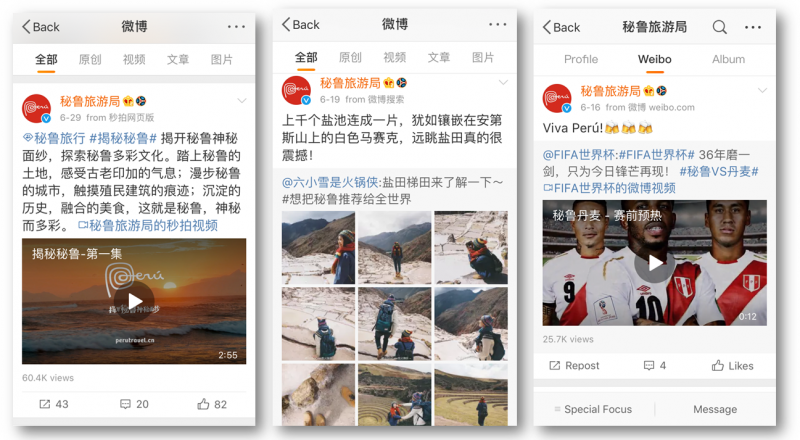 PromPeru’s Weibo content includes videos, posts on trending topics like the World Cup, and reposts from other users on traveling in Peru

Dragon Trail and PromPeru worked together to arrange a trip to Peru for two Chinese KOLs. The first is Ye Ziyi, also known as ‘Star Ranger.’ A travel blogger and astronomy photographer, she is ranked in the top 100 KOL influencers and has 134,000 fans on Weibo and 30,000 followers on WeChat. The second KOL, Zhao Hong, aka J-Fever, aka MC Little Tiger, is one of China’s top freestyle rappers. He’s won the championship of the ‘Top MC Battle’ in China twice and has been profiled in international media, including the BBC – plus, some of the lyrics in his songs expressed his desire to explore South America. With close to 67,000 followers on Weibo, Zhao Hong has also collaborated with Visit California and Costa Cruises. Together, Ye Ziyi and Zhao Hong spent two weeks in April 2018 traveling through Peru, which they both covered extensively on their own social media channels. At the same time, Dragon Trail filmed throughout the trip and has produced two videos to showcase the experience. 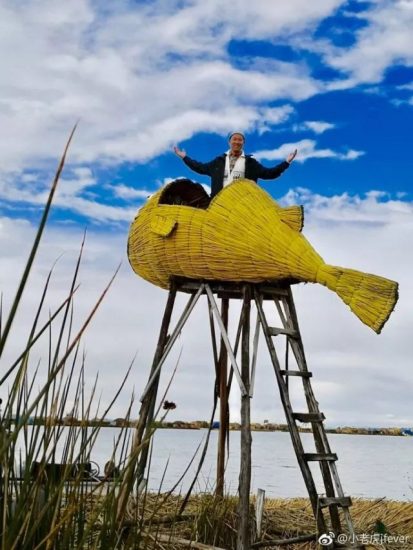 The videos edited from raw footage taken during the two-week KOL trip to Peru cover different aspects of Peru to spread awareness and maximize the appeal of this diverse country. The first is a promotional tourism video to introduce the new destination to Chinese audiences (watch it here). Following Ye Ziyi and Zhao Hong, the short video focuses on Peru’s natural wonders, ancient historical sites and the excitement of outdoor adventure in pristine and magical landscapes. The second episode is a more informative, documentary video, showing the KOLs’ travel experience, with useful travel tips and suggested destinations (watch it here). This video emphasizes the cultural experience in Peru, including food, history and dance. 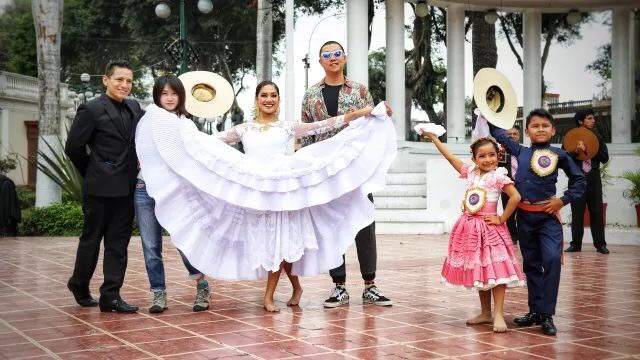 Both KOLs had experience with filming, and this was one of the keys to success, says Dragon Trail’s Content Marketing Manager, Wang Mi, who oversaw the trip. “Ye Ziyi is a photographer/filmmaker herself, so she understood what the filming team wanted. And Tiger is a musician, with a lot of experience being filmed. These things both helped the team to complete their work more efficiently,” she said.

While the travel and filming schedule was strenuous – which made fairly young KOLs the right choice – the journey was full of creative inspiration. “For example, on the road, Tiger would randomly freestyle rap about Peru,” recounts Wang Mi. “These kinds of things are the materials that will really make the film.”

Following the two KOL videos, Dragon Trail is producing a series of 27 additional short videos about Peru, which will be published on Perutravel.cn, and distributed via Peru’s WeChat and Weibo accounts.